This project closed and reported its final results in July 2021, see the consortium’s press release or listen to Professor Sara Bernardini (Royal Holloway – University of London) and Chris Cieslak (BladeBUG) discuss the scenario on BBC Radio 4’s 39 Ways to Save the Planet: Robots of the Wind.

Inspecting the blades of an offshore wind turbine can be a difficult task. Restrictive weather windows and extreme conditions at sea combine to create a challenging working environment, while lost revenue from turbine downtime and the cost of vessels and technicians make increasing the efficiency of inspections a top priority for the industry. 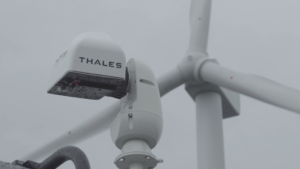 Under the MIMRee scenario, a Thales autonomous mothership detects defects in wind farm blades using an onboard inspection system that can scan the structure of wind farms blades while they are still turning, sometimes at speeds of 200mph at their tips. The mothership then signals the blades to stop and launches a specially adapted drone that can transport a six-legged ‘blade crawler’ onto them to effect repair.

The inspiration for the project was drawn from space exploration, the epitome of an extreme environment. Professor Sara Bernardini, who previously worked on mission planning for space mission operations, including the NASA’s Mars Exploration Rovers programme, developed the AI system that controls how the MIMRee robots work together and communicate with humans.

Another crucial technological breakthrough was developing a robot’s ability to repair blades. The BladeBUG robot was lent to the project by BladeBUG Ltd, a London start-up that has previously achieved the world’s first robotic ‘blade walk’ at a working offshore wind turbine.

Wootzano Ltd fitted their patented electronic skin, used in harsh environments such as nuclear decommissioning and applied it to the feet of the crawler robot. The Wootzkin allows robots to navigate around slippery wind turbine blades monitoring for slips and avoiding falls whilst carrying out repairs.

The Royal College of Art’s Robotic Laboratory developed the repair module that is capable of cleaning and recoating damaged blades.

Drone technologies were adapted to take-off and land on the autonomous vessel when it is moving at high speed while it is carrying the blade crawler. This phase of the work was led by the University of Bristol, University of Manchester and Perceptual Robotics.

The project’s core challenge was to unite these systems into a holistic solution capable of planning, communicating, sharing data, and working together on complex sequences of tasks.

Bringing together cross-sector partners to develop never-before-seen technology, the project has shown the potential for robotics and autonomous systems to shape the future of offshore wind and push the boundaries of robotic intelligence.