Unique among offshore wind testing facilities, the towering 7MW machine plays host to some of the industry’s most exciting innovations for testing and validation. 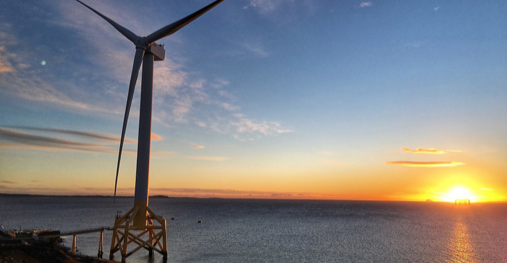 Connected to shore by a short ramp, the Levenmouth Demonstration Turbine is an integral part of our Testing and Validation facilities. It allows developers to demonstrate new systems and methods – without the associated time and costs of conducting tests at a working offshore wind farm.

Since 2016, LDT has attracted 98 SMEs for technology development, testing or demonstration. It is also a key asset in our core research and development programme with 45 projects completed or under contract at the facility.

800+ sensor outputs reporting from the turbine

ORE Catapult believes that the offshore wind sector has the potential to cut its inspection costs by almost 40 per cent by integrating robotics and automated systems into its operations. LDT is the test-bed for both SMEs and academic developers working in this area, hosting demonstrations of crawling, climbing, aerial and sub-sea robots.

In 2018, Livingston-based Cyberhawk was one of a group of autonomous inspection providers that were invited by the Catapult to perform representative commercial tests on the turbine so that an industry baseline for quality inspection could be identified. Later in the year, Edinburgh’s MarynSol tested its SeaSmart automated marine survey using autonomous vehicles at the Levenmouth Demonstration Turbine.

Over the next two years, the turbine will also see trials of the ground-breaking MIMRee robotic inspect-and-repair mission, which brings together drones, blade crawlers and autonomous vessels together in fully automated missions.

In 2016, Limpet Technology approached ORE Catapult to seek help in developing their ‘Get Up Safe’ (GUS) system, a motion compensated personnel hoist that provides maintenance teams with ladder-free access to offshore wind farms. After successful trials at the Levenmouth turbine, they were invited by global offshore wind leaders, Ørsted, to further demonstrate GUS on two of their UK wind farms, leading to Ørsted acquiring a 22.5% stake in Limpet spin-off company, Pict Offshore.

The turbine is also the test-bed for experimentation with a variety of new digital applications, led by ORE Catapult’s Data and Digitalisation team in partnership with technology developers. Bristling with more than 120 packages of instrumentation, the facility hosts everything from lidar installations, novel lightning strike detection systems and even sensors that monitor the conditions within its nuts and bolts.

The turbine has enabled an ORE Catapult competition, funded by the Scottish Government, to develop sensor technology and data systems that can help with product development as well as operation and maintenance of wind farms. Among those successful in the competition and now fitting the turbine with sensors are three Scottish companies, Turner Iceni, Sensor-works and Hydrasun. See all ORE Catapult’s Innovation Challenges for SMEs.

The onshore met mast at the site enables the testing, calibration and verification of onshore lidar systems. With access to high-quality wind resources and environmental data, developers and manufacturers can compare and verify new remote sensing techniques against traditional methods.

Since 2016, the Catapult has funded a STEM ambassador at Levenmouth Academy which has evolved into a full-time STEM Principle Teacher position, delivering extensive programmes throughout the school in areas such as robotics, drones and programming.

The Academy was also a beneficiary of ORE Catapult’s STEM Club Start-Up programme, which used funding from the Royal College of Engineering to spark local children’s interest in offshore renewable energy as a future career.

Other ways in which the Catapult has created opportunity for young people in the area are: 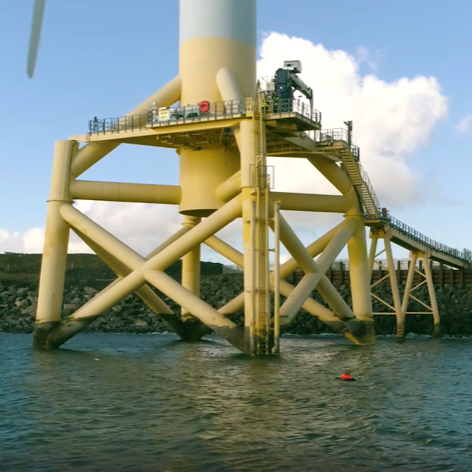 Award of the Section 36 Consent Variation

On Thursday 30 August 2018, ORE Catapult was awarded a Section 36 consent variation by the Scottish Government to operate the Levenmouth turbine until 2029. To request a copy of the Decision Notice, Marine Licence or Section 36 Variation Consent, please Contact Us.

Having the turbine available as a site that we can access easily, compared to a genuine offshore site, is enormously valuable… It is of huge significance in terms of reducing the cost and time of bringing new systems to market.

Lorna joined the Offshore Renewable Energy (ORE) Catapult in September 2016 in the Operational Performance Directorate. She is involved in both research and design projects, with a background of mechanical design and project management. Lorna works on a wide variety of exciting projects in wind and tidal power, engaging with SMEs, organisations and academia to address industry challenges through technology innovation and research; also working with companies to diversify and transfer their technology offering to the wind, wave and tidal industries.

Since August 2017 she has been responsible for coordinating information, access, demonstration and validation testing in and around ORE Catapult’s Levenmouth Demonstration Turbine in Fife and has supported over 140 technology developments, demonstrations and research projects. With a broad range of skills and a depth of experience in marine renewable energy development, she is now leading the delivery of projects under the Energy Transition Alliance (ETA) in collaboration with the Oil and Gas Technology Centre (OGTC). This is a ground-breaking collaboration which aims to transform the energy sector, accelerating the UK’s transition to a net-zero future and ensuring a reliable and secure source of power for the UK. Current research areas include sustainable decommissioning and the circular economy; clean hydrogen development, and carbon capture, utilisation and storage (CCUS).

Lorna is also responsible for the STEM engagement strategy across ORE Catapult’s Scottish sites. In 2018 she won a Royal Academy of Engineering Ingenious Award to develop a plan of engagement with local primary schools. In collaboration with a number of local and national organisations and charities she has driven community engagement, promoting STEM careers and the importance of sustainability across the country. This led to Lorna being awarded the IET Young Woman Engineer of the Year Women’s Engineering Society (WES) Prize in December 2018, recognised as a WATC Rising Star 2019 in Science & Engineering and as a finalist for the Contribution to Skills Award at the Scottish Green Energy Awards in December 2019.

Find Out More >
We use cookies on our website to give you the most relevant experience by remembering your preferences and repeat visits. By clicking “Accept”, you consent to the use of ALL the cookies.
Cookie settingsACCEPT
Manage consent